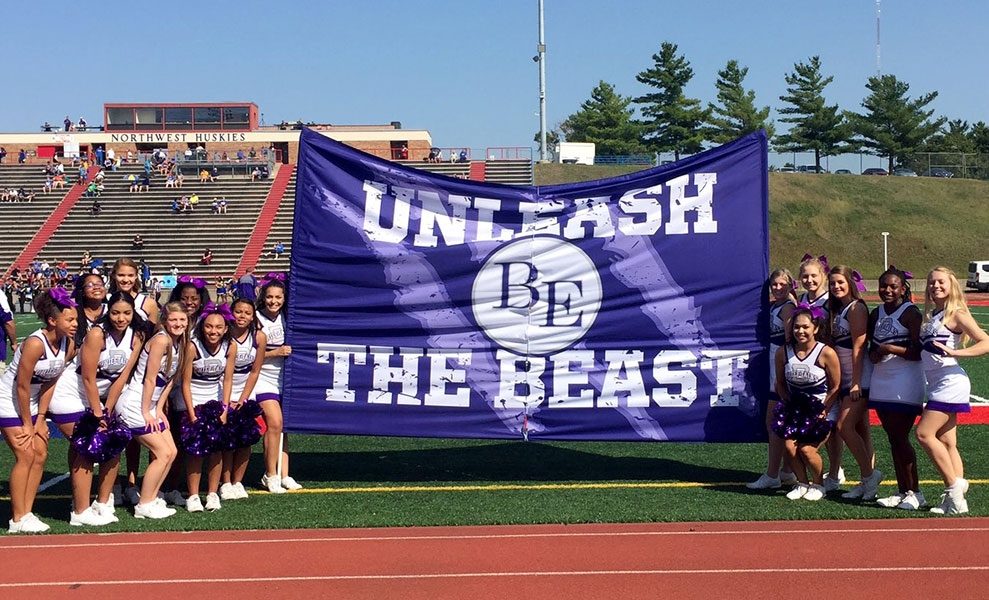 Discouraging Messages: This is meant to diminish the confidence, posing your team as a threat to them. These are popular among rivalries.

Advertising Events: Banners can also be used as a means of marketing or advertisement. A side of the banner can be used to advertise sponsors or upcoming events.

Celebrating Milestones: Banners are often used to celebrate players or team’s milestones or accomplishments. Most times, the player or team’s name is engraved on the banner.

What are the features of breakaway football banners?

Most breakthrough banners are created with pole pockets on both sides of the banner. These pockets help hold your banner during usage.

Since breakaway banners are made to be run through, they are built to be long-lasting to resist stress from repeated entries by teams.

What are the tips for creating a breakaway sport banner design?

Below are tips you can adopt in making your banners:

Place the banner pieces on a hard surface to form a puzzle-like shape.

Fold the inner sides of the banner paper such that the four large pieces are joined together.

Use less sticky tape in the middle of the paper since that’s the point where players will breakthrough.

These wooden rods act as the handles for the breakaway banner.

Spin the paper over and beautify it.

Decorate the paper with pictures or images of the team or club’s mascot, team name, team motto or things related to the club. These will thrill fans and players.

Store banners carefully to prevent damage. To store it, gently roll the banner in a loose role and keep it till a later time, when there’s a game or match.

Once the game begins, have enthusiastic fans, or cheer squad hold both sides of the banner.

The team will break through the banner in the nick of time.

In creating a banner, factors like size, width, logo, graphics and wordings should be considered. Ensure the banner is large enough for easy passage of players. Also, choose a paper that can be painted on, resists stretches and can tear easily. In choosing paper for your banner, it’s ideal you buy enough so you can test if the banner is the right one. A paper that doesn’t tear easily can result in players injuring themselves as they try to run through the banner.

Generate excitement and team pride before every game with breakaway banners.  Nothing beats the traditional promotion game like using banners all over the city. Stir up team spirit with these team sport banner designs.